IN THIS BREATHTAKING WORK STEEPED IN MĀORI LEGEND, 8 DANCERS ROAM A BARREN LAND, TRAVELING THE WORLD’S WINDS, ITS WATERS, ITS EARTH AND FIRE, AND DARE TO DEFY THE CONSTRAINTS OF GRAVITY.

The earth cracks and the air gets hot. Human figures are transformed into unearthly creatures as they travel the world’s winds, its water, its earth and fire as dancers dare to defy the constraints of earth’s gravity, to burrow into the earthly breast of Papatuanuku, and to bathe equally in her storms and tranquil depths. Steeped in Māori legend, ‘Nga Hau E Wha marks the 2011 return of Ōkāreka to the stage. Guided by Maori beliefs, mana ( honour and integrity), whanau (family) and matataki (challenge), this contemporary dance work is filled with bold and spiritual story telling, that haunts you long after you’ve left the theatre.’

“Utterly compelling. From the understated and mesmerising beginning to the emotional and powerful conclusion, Nga Hau E Wha definitely goes down as the best I’ve seen in ages. The lightning is evocative and imaginative, the music is intensely beautiful and the choreography stretches the boundaries of this experience well beyond the usual.” Hannah Molloy, Theatreview

“Occasionally there are dance performances so captivating, you forget to breathe.” Otago Daily Times 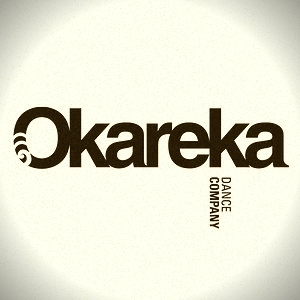 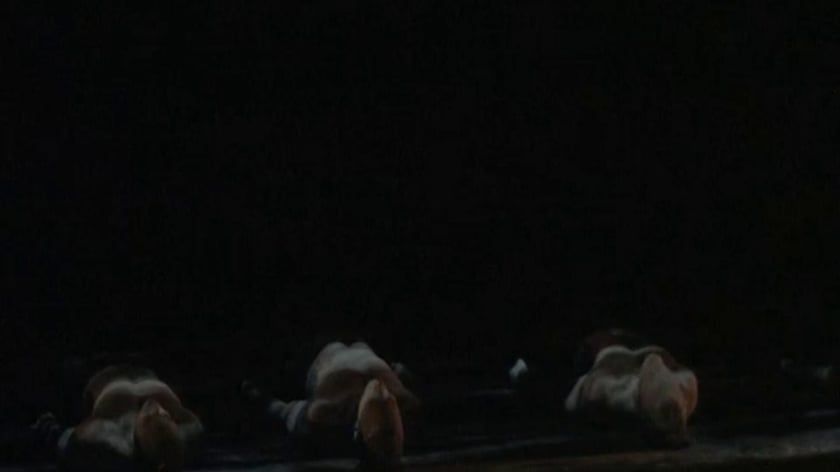 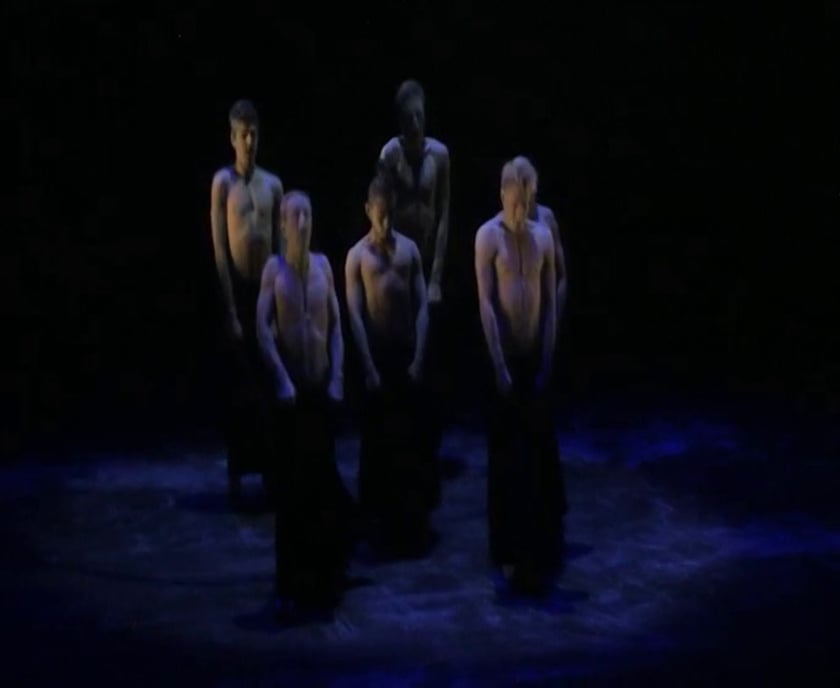 Taiaroa trained at the New Zealand School of Dance, graduating in 1984. He has since performed with major dance companies both at home and abroad, including The Royal New Zealand Ballet, Douglas Wright and Dancers, Michael Parmenter’s Commotion Company, Black Grace, Orotokare and Atamira Dance Company. Tai has successfully choreographed many high profile events across Australasia including the Brancott Estate World of Wearable Arts Awards in Wellington, Auckland’s Christmas in the Park and over the past 3 years has choreographed operas for NZ Opera. Tai is also part of the teaching faculty at the UNITEC Bachelor of Performing Screen Arts, and has taught at The New Zealand School of Dance as well as many private dance schools.

Taane Mete graduated with honors from the New Zealand School of Dance in 1988. His performing experience has seen him dance with companies such as Footnote Dance Company, Douglas Wright Dance Company, Taiao Dance Company, Fusion Dance Theatre, Michael Parmenter’s Commotion Company, The Royal New Zealand Ballet, The Human Garden, Mau Dance and Atamira Dance Company. In 2005 and 2006, Taane worked as a television presenter for the program Takataapui. Taane graduated from the Leadership New Zealand Program in 2008 and continues to advocate a leadership role in the dance community. Now into his 30th year as a performer Taane continues to develop exciting new projects for the company repertoire. 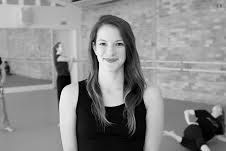 Bianca completed a Bachelor of Performing and Screen Arts in 2009. She has since made her mark in the field of contemporary dance in Aotearoa, gracing the national stage with the likes of Okareka Dance Company, the World of Wearable Arts and Atamira Dance Company. In 2013 Bianca danced in Atamira’s show ‘Kaha’ touring to Hawaii, San Fransisco and Jacob’s Pillow Festival in Massachusetts. Bianca was also the 2013 recipient of the esteemed Eileen May Norris Dance Scholarship; a grant that recognises outstanding dance talent in the country. Receiving this has enabled Bianca to continue the momentum she has built by opening opportunities to travel internationally as part of her on-going development as a dancer, performance artist, co-deviser, collaborator, teacher and choreographer. “I already feel like I have everything I desire so I’m going to try to give back everything I get out of it.”

Carl began full time dance training at the Queensland Dance School of Excellence (QDSE) in 2006. After attaining a Diploma in Dance Performance and the QDSE Special Performer Award in 2007, he was accepted into the Modern Major program at the New Zealand School of Dance. Here Carl worked with leading choreographers such as Craig Bary, Victoria Colombus, Sarah Foster-Sproull Malia Johnston, Ross McCormack, Shona McCullagh, Taane Mete, Lina Limosani, Michael Parmenter, Taioroa Royal, and Maggi Sietsma. In 2009, Carl was privileged to perform in ‘Project Born’ directed by Jo Randerson and Sir Richard Taylor, a charity event for the Neonatal Trust in collaboration with Weta Workshop. That year he also performed ‘He Tonga’ by Taane Mete and Taioroa Royal, and ‘X300’ by Frances Rings. Carl performed in the 2011 Choreographic Season Sketch, in ‘Newton’s Cradle of Flesh and Bone’ by Levi Cameron and Yan Hao Ken Du, ‘Variations on a Team’ by Zoë Dunwoodie and ‘Sheapard’ by Thomas Bradley. Carl has also performed Malia Johnston’s ‘Body Fight Time’ with Footnote Dance Company which toured in Wellington and Auckland. After graduating from the New Zealand School of Dance In 2011, Carl performed with Black Grace in their Germany, South Korea and New Zealand tours, in The World of Wearable Art, and with Okareka Dance Company in their New Zealand tour of ‘Nga Hau E Wha’.

Daniel studied at the New Zealand School of Dance where he performed in works by Juri Kylian, Paul Taylor, Craig Bary, and Raewyn Hill. He graduated in 2011 with a Diploma in Dance Performance. After graduating, Daniel joined Black Grace performing in Neil Ieremia’s ‘Waka’ which toured Germany, Korea and New Zealand. In 2012 Daniel performed in the World of Wearable Arts and later toured New Zealand with Okareka Dance Company in ‘Nga Hau E Wha’. In 2013 Daniel moved to Hong Kong and performed in shows throughout Macau, Hong Kong, China and Singapore. Currently based in London, Daniel has been working consistently as a contemporary and commercial dancer and in 2014 he performed at the Royal Opera House in the premiere of ‘Ex Nihilo’, choreographed by Mayuri Boonham of ATMA Dance Company, and then toured with the show. Daniel has also performed ‘The Human Edge’, also choreographed by Mayuri Boonham.

Jonathan grew up on the Kapiti Coast where at a young age he started dancing with tap and jazz. But it wasn’t until 2004, when he was accepted into the Junior Associate program at the New Zealand School of Dance (NZSD), that he was able to develop his passion for contemporary dance. After finishing high school as Head Boy of Paraparaumu College Jonathan became a full time dance student at the NZSD, where he studied for five years in total. During this time he was fortunate enough to perform works created by Sarah Foster-Sproull, Lina Limosani, Jiri Kylian and receive high reviews for his performance in Paul Taylor’s Company B. Highlights for Jonathan in his final year included being critically acclaimed for his performance and choreography in the choreographic season Sketch, attending Hofesh Shechter’s summer intensive in London, and performing with Okareka for the premiere of Nga Hau E Wha. Since graduating, Jonathan has had the opportunity to work with the New Zealand Dance Company and perform with Black Grace for their tour to Busan in South Korea. He now returns to Okareka Dance Company for another season of  Nga Hau E Wha.

After graduating from UNITEC’s Performing and Screen Arts program in 2004, Jesse has gone on to forge a career in the dance industry through performance, choreography, rehearsal direction and company administration. In 2007, Jesse joined Footnote NZ Dance as a full time company member and worked with some of New Zealand’s leading choreographers including Michael Parmenter, Raewyn Hill, Malia Johnston and Sarah Foster-Sproull as well as debuting his first choreographic work ‘Little Sister’ in 2009. During his three year contract with the company, Jesse danced in numerous tours both nationally and internationally including Australia, Hong Kong and Belgium. His experience includes working on the acclaimed World of Wearable Art Awards Show, touring internationally with Vospertron and dancing and choreographing for many of NZ’s high profile corporations. He has extensive experience dancing and choreographing for film and television including both local and international television series, commercials and music videos. Jesse joined Okareka Dance Company in 2011, performing in the world premiere and national tour of ‘Nga Hau E Wha’ and later as rehearsal director for ‘Tama Ma’ at the Holland Dance Festival in January 2014. Jesse assistant-choreographed ‘K’Rd Strip’ in its first season, and now joins the cast for 2015.