It is a journey towards something essential;
a moment where we come to life;
a rebirth into consciousness;
being re-born;
and returning to the womb, re-tracing one’s umbilical cord back to Papatuanuku, back to Mother Earth, back to your papakainga (home base).

The modern world is an artificial system of lines reaching from one person to the next. Lines that touch, speak, listen and feel – replacing faces with interfaces. Kaore to kanohi ki te kanohi – re-visioning intimacy as a place by oneself. Utopia, chaos, unrest and sublime inspire the conversations of power and control, which lead to disconnection.

Together with 8 diverse dancers and performers, WIRED will re-stimulate your senses, and reinvigorate your body to rewire your brain.

Aaron started his performing career as an aerialist for the all-female stiltwalking company Empress Stiltdance. Shortly after, he was picked up by travelling New Zealand circus, Circus Aotearoa, as their Chinese Pole performer and sound man. Aaron travelled to and from stands at the big top and Empress Stiltdance performances for six months.
After touring New Zealand he took part in a month long artist-in-residency in Cairns, Australia; progressing and polishing the Empress show, Kahuku. With Empress he has also performed tissu for Chinese New Year in Hong Kong and stilt adagio/aerials for Australia Day in Sydney.
He has trained handstands, straps, tumbling and flexibility at the Beijing International Art School (Zhongguo Zaiji Tuan). Soon after his return to New Zealand he won Best Aerialist and People’s Choice Award at the Golden Canaries, Wellington. He has also performed in Magenta Diamond’s Cabinet of Curiosities, Same Same But Different, Knock Knock, and Jungle Fantasy – as well as in a number of private performances and corporate functions.

Jag Popham, born in Auckland, New Zealand, started dancing at age 3 training in classical ballet, contemporary and capoeira. At age 17 he decided to further his training at the New Zealand School of Dance, majoring in contemporarydance and gaining his Certificate in Dance Performance.
During his time at NZSD, Jag performed in World of Wearable Arts in 2014 under the direction of Malia Johnston and Victoria Colombus. In 2015 he performed a duo in Y-Chromozone as part of Tempo Dance Festival. In 2016 he performed Malia’s ‘Miniatures’ at Tempo Dance Festival and choreographed a short work, Obelus, for NZSD’s Choreographic Season, ‘SCOPE’.
Since graduating, he has worked with Australian based Expressions Dance Company performing in several seasons. ‘Black’ premiered in Brisbane 2016 at QPAC and later on that year the show toured to China. Jag performed in Guangzhou, Shenzhen, Jiangmen, Dongguan and Huizhou.
Through different avenues Jag has had the privilege to work with established artists such as James O’Hara, Kuik Swee Boon, Thomas Bradley, Xing Liang, Natalie Weir, Tomislav English.

Rose Philpott graduated from Unitec with a BPSA, majoring in Contemporary Dance, in 2012. She has been working as a freelance dancer, choreographer and teacher for the past 5 years.
Rose has performed for Sarah Foster-Sproull and Footnote NZ Dance, Okareka Dance Company, World Of Wearable Art, Claire O’Neil, Kerryn McMurdo, Jessie McCall, Lucy Marinkovich and Anita Hunziker, toured to Rome with the contemporary opera ‘The Juniper Passion’ and is a founding member of Foster Group.
Her choreographic credits include ‘numero numero’ which won the ‘Tempo Award’ in the Short and Sweet Dance Festival 14 and ‘HEALR’ created with Jessie McCall in 2016 after receiving the first Wellesley Studios Summer Residency.
She is the 2016 recipient of the Eileen May Norris Dance Scholarship.

Taniora Motutere is a freelance dancer and choreographer with training in Contemporary Dance, Hip Hop, and Kapa Haka. He graduated from Unitec in 2015 with a BPSA majoring in Contemporary Dance.
His recent performances include the NZ Opera Production of “Brass Poppies”, “Tiki Taane Mahuta”, choreographed by Tanemahuta Gray, Malia Johnston’s “Moon”  and “Cudo” choregraphed by Andrew Cesan. He was a choreographer and performer in Identity Dance Company’s shows “Out of the Box” and ‘Next”. Taniora has performed at many Arts Festivals around New Zealand with both established and emerging choreographers and has recently choreographed and danced in Shapeshifter’s music video for ‘Oculus”.
Taniora is a founding member of Identity Dance Company and has won two silver medals at Hip Hop International World Championships. In 2016 they won Maori Television’s Haka Fusion Competition and are currently appearing in the Steinlager Tokyo Dry advertisement. He also works as a core dancer with Momentum Productions.

Celina is a dancer, teacher and choreographer based in Auckland, New Zealand. She graduated from UNITEC in 2016 with a Bachelor of Performing and Screen Arts majoring in contemporary dance. Her background is in in ballet and jazz and she is now training in contemporary and hip hop dance. She recently created a contemporary dance piece called ‘Still Life’ as part of the show ‘4 Leaps 1 Point’ with DyCypher Productions. Celina has qualified for, and competed in the Hip Hop International World Championships with Identity Dance Company in 2016 and 2017. She is also part of the Sky City Dance Team who dances for the Breakers and other events. Celina was also a performer, alongside Joshua Faleatua and Matthew Moore, in the music video for Lego Ships by Eden Mulholland. She is currently freelancing and teaching dance classes at Neverland Studios.

Oliver Carruthers graduated from Unitec in 2017 with a BPSA majoring in Contemporary Dance. During his time there he had the opportunity to work with a variety of choreographers including Michael Parmenter, Douglas Wright, Mary-Jane O’Reilly, Claire O’Neil, Malia Johnston, Kelly Nash, Tupua Tigafua, Tim Podesta, Charles Koroneho, Katie Burton, Louise Potiki-Bryant and Joshua Cesan.
Oliver has had a heavy involvement in Tempo Dance Festival, performing in various shows over the past 3 years. In 2016 his work ‘Jargon’ was selected to be performed in ‘Alchemy’, and in 2017 performed in ‘Limbs@40’, a reunion show celebrating the acclaimed Limbs Dance Company performing works by Wright and O’Reilly.
His self-choreographed solo ‘Not’ won both the Wallace Arts Best Solo Performance Award and Standout Performer Award in Short and Sweet Dance Festival 2017 and was asked to be performed in whY Chromozone in Tempo Dance Festival.
Oliver has performed in the BBC’s ‘Doctor Who Symphonic Spectacular’ at Vector Arena, was a dancer in the New Zealand TV series of ‘Hillary’ and had a speaking role in the American TV series ‘Ash v Evil Dead’. In March of this year, he will feature in the New Zealand Dance Company’s world premiere of Michael Parmenter’s ‘OrphEus – a dance opera’.
Oliver has had a rich history with Okareka Dance Company including performing in their full length work ‘Kirihimete o Te Rangatahi’ and is thrilled to be performing in ‘Wired’ as his first professional dance show since graduating from full time dance training.

MEET THE TEAM BEHIND WIRED

Taiaroa trained at the New Zealand School of Dance, graduating in 1984 with a Dip. Dance. He has performed with many of NZ’s major dance companies both at home and abroad, including Limbs Dance Company, The Royal New Zealand Ballet, Douglas Wright and dancers, Michael Parmenter’s Commotion Company, Black Grace, Orotokare and Atamira Dance Company.
In 2010, Tai was awarded the Te Tohu Toi Ke – Making A Difference Award from Te Waka Toi for his contribution to Maori contemporary dance. He is the first dancer and the fifth recipient of this award. Later that year he was honoured in the Tempo Dance Festival’s ‘Honouring a Dancer’, where the industry, along with close friends and family, celebrated Tai’s long outstanding successful career in the New Zealand dance community.

In 2011 Tai accepted the Koowhiti Lifetime Achievement Award outlining him as one of Aotearoa’s outstanding Maori Dancers and Choreographers.
Tai has choreographed for Brancott Estate World of Wearable Arts Awards, Wellington; Christmas in the Park, Auckland; New Zealand School of Dance, Wellington; NAISDA, Sydney, Australia; Dominion Rd The Musical, and choreographed and associated directed for NZ Opera. Tai is also a part-time teacher at the UNITEC Bachelor of Performing Screen Arts, and has taught at NZSD and private dance schools.
In 2007 Tai formed OKAREKA DANCE COMPANY alongside Taane Mete.

Taane Mete graduated with honours from the New Zealand School of Dance in 1988. His performing experience has seen him dance with companies such as Footnote Dance Company, Douglas Wright Dance Company, Taiao Dance Company, Fusion Dance Theatre, Michael Parmenter’s Commotion Company, The Royal New Zealand Ballet, The Human Garden, Mau Dance  and Atamira Dance Company. In 2005 and 2006, Taane worked as a television presenter for the program Takataapui. Taane graduated from the Leadership New Zealand Program in 2008 and continues to advocate a leadership role in the dance community. Now into his 30th year as a performer, Taane continues to develop exciting new projects for the company repertoire.

Sarah Foster-Sproull is the Artistic Director of Foster Group and Creative New Zealand’s Choreographic Fellow for 2017-2019. She has choreographic relationships with Footnote New Zealand Dance, The Royal New Zealand Ballet, Okareka Dance Company, Co3 (Perth), Tamsyn Russell (Edinburgh), T.H.E. (Singapore), Lobos Art Collective (Los Angeles), and VOU (Fiji). Sarah holds a Masters in Dance Studies from the University of Auckland with a focus on choreographic leadership. Her choreographic research traverses large scale works for up to 35 performers, to intimate performances involving one or two dancers, and in 2015 she was one of five choreographers selected internationally by Crystal Pite to participate in the Craft of Embodiment workshop in Banff, Canada. This year Sarah will premiere work with the Royal New Zealand Ballet Company, Footnote NZ Dance and Guangdong Modern Dance Company (China), and tour her critically acclaimed show Orchids (Foster Group) throughout New Zealand.

Set designer for shows across theatre, opera and dance, John Verryt is largely responsible for the look of a performance. His extensive bio includes several works with the NBR New Zealand Opera, dance designs for Black Grace Dance Company, Michael Parmenter Dance Company and more, and sets for theatre performances from Death of a Salesman to Badjelly the Witch. He also contributed to The Millennium Show at the Auckland . John has been Okareka’s set designer from the beginning in 2007. 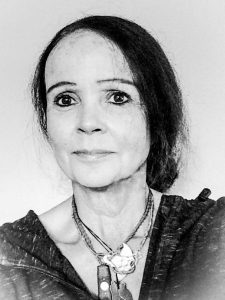 Originally from Montreal, Vanda has been living and working in New Zealand since 1999. Her design work covers theatre, dance, television, fashion, and music during time spent living in North America and the U.K as well as New Zealand spanning 30 years . For 10 years with the Atamira Dance Company, Vanda produced designs for the award winning Ngai Tahu 32 and Taonga as well as Memoirs of Active Service, Te Houhi and the popular Kaha series. Most recently designing for Red Leap Theatre’s SEA she had the opportunity to cement her love of the ocean into her work.
Other work includes ongoing design projects with the Auckland Philharmonia and Trash to Fashion plus production work on music projects with Tihi Productions. Vanda also works for the Waitakere Ranges Regional Park and is an active lifeguard at Piha beach.

Accomplishments this year are National Open Womens Champions for Dragon Boating and female lifeguard of the year for the Piha SLSC. She is the proud mother of 3 talented children.

Well respected within the NZ Theatre Industry as a director, actor and designer, over the years Andrew has worked with most of the country’s major theatre companies and has become known for his contribution to the development of new works.
Andrew has collaborated on a great number of premier works: including scripts by Eli Kent, Jo Randerson, Oscar Knightly, Gary Henderson, and Duncan Sarkies. He is currently developing a work about Bert Potter’s Centrepoint community with writer Anders Falstie Jensen for ATC.
His dramaturgy for dance includes collaborations with Malia Johnson and Sarah Foster-Sproull.
A passion has been the developing of large-scale immersive presentations, combining his skills as director, designer and dramaturg. These include devised adaptations of A Clockwork Orange (for Silo Theatre at the Auckland Festival) and in 2013 he directed and designed Apocalypse Z, an immersive theatre work about a Zombie Apocalypse in Auckland’s Aotea Square.